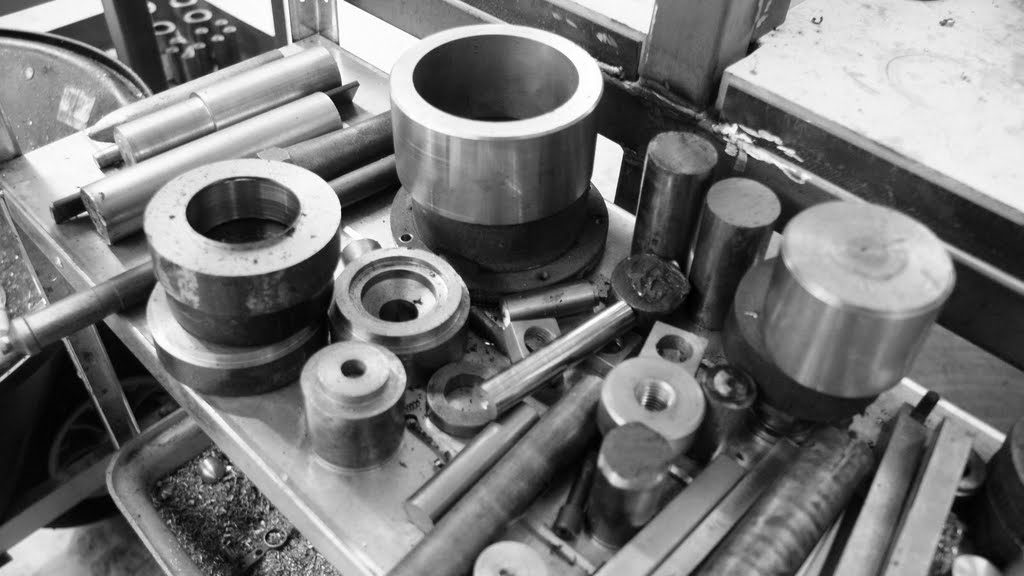 June 16, 2016 in Engineering for motorcycles

Metals are one of the fundamental materials used in our environment, in vehicles, and in our motorcycles more specifically.  We’ll just talk about metals in this article, and leave plastics, composites and other non-metals for another time.

If you can recall your high school chemistry, a metal atom consists of an array of ions surrounded by a cloud of electrons.  This structure results in many of the properties of metals. Lets review some of those properties and their impact on your custom bike project:

All metals (except mercury, such as found in a traditional thermometer) are solids at room temperatures. However, like any solid, they’ll eventually melt and become a liquid.  Mercury melts at -39 degrees centigrade.  Tungsten melts around 3400 degrees centigrade.  Its incredibly unlikely you’ll see any temperatures hot enough to melt metals on your motorcycle.  Temperatures inside the engine might be between 700 and 2000 degrees centigrade (depending on who you ask, and what sort of engine is under scrutiny).  So, in normal operation, melting points of metals should not be of concern on your bike project.

Density is defined as the mass of the item per unit volume.  Most people would appreciate that a block of aluminium would be lighter than a block of steel of identical size.  In an application where the weight of the item is important (such as aircraft or spacecraft), density is an important property.  Of course, on a racing motorcycle, this is also supremely important.  Two motorcycles of equal power will perform differently if one is lighter than the other.  On a production motorcycle, this is one of the factors the manufacturer will be considering against cost and other performance criteria.  On a custom motorcycle, performance is perhaps not the most important property (unless you are building a race bike) so some extra weight might not be a problem.  Density is probably not a prime factor on your bike project.

Electrons are able to flow across the ion arrays when a “potential difference” (or “voltage”) is applied across the metal.

Copper is most traditionally associated with electrical conductivity as it is the primary metal used in wiring, such as that on your motorcycle.  Silver happens to be a better conductor of electricity, however for cost reasons copper is usually the first choice for industrial wiring.

Metals are generally considered good conductors of heat, compared to non-metals.  Thermal conductivity itself is not really that important to your custom motorcycle project, but the next property, Thermal Expansion, is more interesting.

One of the ways the size changes can be described is via the co-efficient of linear expansion.  This is the length change evident over a given length with a given temperature rise.  Aluminium has a very high co-efficient, for example, about double the value for iron (the basis of steel products).  So, if we take a piece of steel and an identically-sized piece of aluminium, and heat them both by, say 50 degrees, the aluminium will grow in size about double the amount the steel will grow.

Now, some parts on your motorcycle see significant temperature increases.  I’m mostly thinking about the exhaust system (which is typically ripe for customisation).  Of course, the engine sees significant temperature changes in operation, but the manufacturer accounts for this in their design and development of the engine, and generally the customiser will not impact this area as part of their project.  As the hot exhaust gases exit the engine (at perhaps 700 degrees), they transfer heat into the exhaust tubing.  The exhaust tubes will start to grow.  Since they are bolted to the engine at one end, they can’t move in that direction, so the growth will be away from the engine.  It might only be a few millimeters total growth (or less).  But this movement should be considered.

Due to the type of atomic bonds between the metal ions, it is relatively easy to bend, hammer, roll or stretch a piece of metal.

Ductility refers to the capacity of the material to be deformed under tension (or “pulling”) without rupture (or failure).

Malleability refers to the capacity of the material to be deformed under compression (such as rolling or hammering) without rupture.

Toughness refers to the capacity of the material to be deformed by bending without fracture.

None of ductility, malleability or toughness have simple qualitative measures, but you might see how they are related to your custom bike project.  If, for example, I was making a custom tank or fender, these properties are relevant.  I might take a piece of aluminium and hammer it into a basic shape, then use an English Wheel to smooth it.  Malleability is the primary factor in this case.  If I took a piece of metal and wanted to bend it into a 90 degree angle to make a bracket, then toughness is the important property.

Tensile strength is simply how much you can pull on a sample of metal before it fails.  This is a real laboratory test used to determine material properties, and is quite important, so we will spend some time discussing it.

In the test, a bar-shaped sample of material which has been carefully measured, is clamped in jaws of the test machine, and is “pulled”, or subjected to a “tensile load” by the machine.  The length the sample increased under this force is measured.  The tensile force is increased, and the measurement taken again. This is repeated under increasing forces until the sample finally fails. Modern test machines take the measurements through sensors and plot the “force-extension” diagram.  Here is a very short video showing a tensile test being conducted:

The “force-extension” diagram is the important part.  Here is a stylised diagram that might be created from the tensile test: 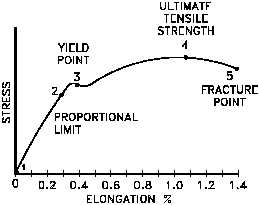 The following observations are illustrated in this diagram:

Your average engineer is quite familiar with this diagram, and more specifically, the diagram generated by a tensile test for the material he or she is using.  Conventional engineering design would suggest we have to have a structure (like our motorcycle frame) that does not “bend” in normal operation.  The engineer aims to stay in the elastic region of the diagram.  So, the loads and forces in normal operation do not travel up the diagram past point 2.  This means the engineer has to know, or be able to estimate, the actual loads expected in normal operation.  A large part of an engineer’s training is determining these loads, and further explanation of this activity is out of the scope of this article.  However, if the engineer finds the loads travel into the plastic region, he has two choices:

Any modifications we make to our motorcycles must not make the machine unsafe for the rider.  So customisers must be aware there are limits to their materials. We may never approach those limits, but be aware they are there.

Traditionally, hardness has been considered as the resistance of a surface to abrasion.  The earliest measurement techniques were based on this concept.  One of the more popular (and still in use) is Mohr’s Scale, used to evaluate the hardness of minerals.  In this scale, substances were arranged in order of hardness such that any material in the scale would scratch any material listed below it: 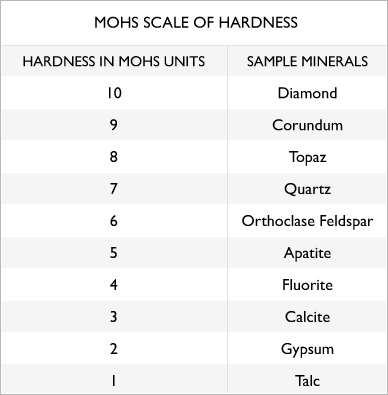 So, diamonds, considered the “hardest substance known to man”, are at the top of the scale, and Talc is at the bottom.

More contemporary tests measure the resistance of the surface layers to plastic deformation under a static load.  A number of different test machines are available for different applications, but their names might be familiar: Brinell test, Vickers hardness test or Rockwell test.

In general terms, hardness is important when parts are moving relative to each other, such as pistons within cylinders, brake discs between the brake pads or chains over sprockets.  Normally, the object that is harder will wear the object that is relatively softer. Engineers normally select materials with known hardness properties so they can control which of the two parts will wear.  The aim is to wear the part that is cheaper or easier to replace.  In the case of a disc brake, normally the brake pads will wear out before the disc is worn to its limit.  Brake pads are the relatively cheap, “consumable” part. The brake disc is the relatively expensive part, so we’d like it to last as long as possible.  Of course, there are exceptions to every rule but this is the traditional approach.

The descriptions above may not be incredibly interesting, but in other articles we will be referring to these properties and linking back to this page for their definitions.

If there are other properties you’d like me to explain, head over to the Contact page and send me an email.