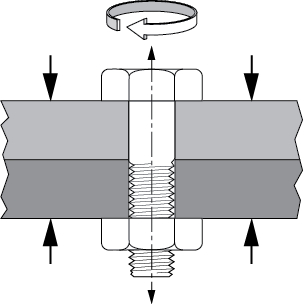 August 9, 2016 in Engineering for motorcycles

Humble bolts seems like a mundane and boring machine component.  However, we engineers always get a little excited at threaded fasteners, simply for the incredible variety available and their significant capability in any engineering application.  You see them in bridges and buildings, aircraft, cars and of course, our motorcycles.

Why would you choose to use threaded fastener?  Usually, for flexibility in assembling or disassembling components.  Sometimes the cost of using a threaded fastener to secure a joint might be cheaper than other options (such as welding a joint together).  In our motorcycles, there will be a combination of reasons.

How do bolts work?

A threaded fastener (lets just simplify and say “bolts” from now on, it will save me typing “threaded fastener” another 100 times) works like a spring.  Remember our discussion in the Basic properties of metals article about the tensile test. A bolt works in tension (meaning the load is parallel to its long centreline axis). When you put a bolt through, say, two pieces of steel, and tighten the nut, the steel plates do not compress appreciably, so the distance between the nut and the bolt head is essentially fixed. However if the bolt is being tensioned, it is stretching between the nut and the bolt head, which are up tight against our theoretical steel plates. If the bolt is stretching, then it is exerting an equal but opposite clamping force on the two steel plates.  This diagram might help illustrate the point.

Over the industrial age through to modern times, various thread forms have been developed by different industries in different countries. This is what they look like in cross section:

The obsessive-compulsive amongst us can dig further into this topic, but the for the purpose of our motorcycles, we are really only interested in the last 50 years or so, which simplifies our review of thread forms.

Common thread forms we might encounter on our bikes will likely be limited to the following three:

A fine thread is useful when you are threading into relatively thin material.  A coarse thread may only have a couple of turns into a thin piece.  When it is loaded in operation there is a chance the threads will strip.  A fine thread means more are engaged in the same thickness material, which means more surface area, which means less internal pressure, and this reduces the chance of thread damage.

So, how do you identify the thread on the bolt you have just removed from your bike?

You could watch this video:

Or, use a thread pitch gauge. This tool has a bunch of “leaves”, each with a specific “saw-tooth” pattern to match a particular thread.

To use the gauge, you need to take an overall measurement of the diameter over the threads, then match one of the gauge leaves to the thread pitch on the bolt.  Threads are all standardised now so you’ll have to find your match from a table (in other words, the choices are NOT infinite!).

Clearly, if we are trying to identify Whitworth, Unified National or Metric threads, we need three different gauges.  This can get expensive. A more economical method is to purchase The Fastener Black Book from a local vendor and make use of the hole and thread identification gauge that is supplied.

First match the bolt diameter to one of the holes in the gauge: 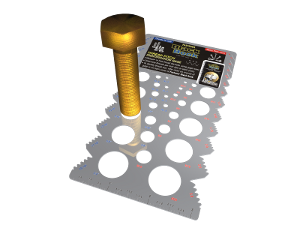 Then, match the thread pitch with the bolt you are using to one of the thread patterns around the perimeter of the gauge: 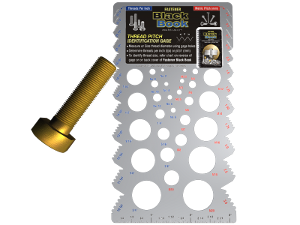 If you are trying to identify the thread form of a nut, you really need to measure the matching bolt to make this process bulletproof (and a lot easier).

If for example, you are replacing a damaged bolt, you need to be able to specify the basic diameter, the thread form, and the length.

If you don’t have any reference books, simply Google “thread tables” and check out the images for different thread tables.

You really need some definite way of identifying bolts.  You could try and match them to an existing known nut, but this can be hit and miss.  I strongly recommend some sort of thread gauge.  I don’t get any kickbacks from The Fastener Blackbook but I highly recommend it (or something similar).  If you are on a journey to customise a bike, some of your purchases are investments in your skills and knowledge, as much as parts for your bike.

We’ll talk about bolt materials, bolt strength, drilling holes, tapping and repairing threads in a future article.  This Tech Note really is the basis for those future articles.

Please contact me if you have any comments, thoughts or feedback on this article.