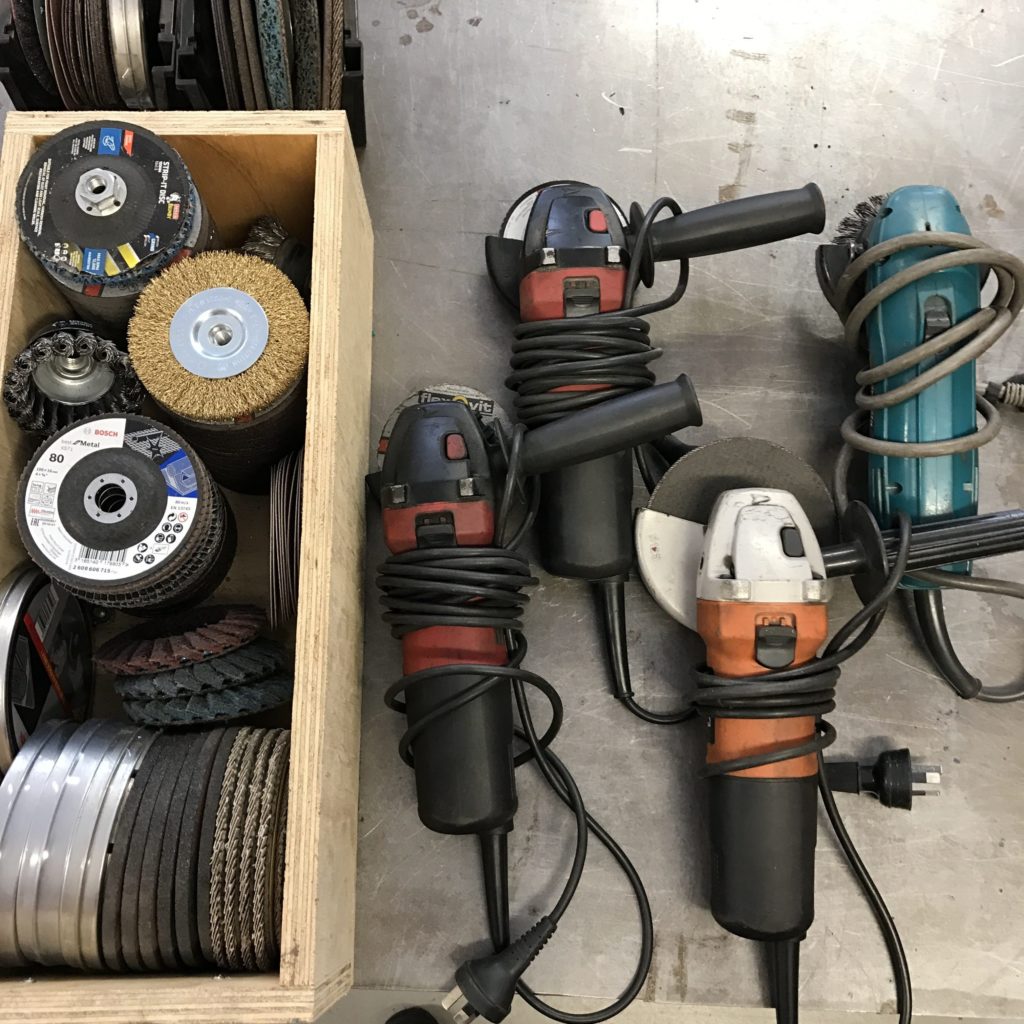 While hand tools are going to be the basis of your tool kit, power tools are great for speeding up your tasks. Can you cut steel with a hacksaw? Can you remove metal with a file? Sure, but its a lot quicker if you use a tool like an angle grinder.

I’ve collected a few different angle grinders over the last few years. Let’s talk about each one of them and why they’re useful and why I have them set up with the accessories that I’ve got. 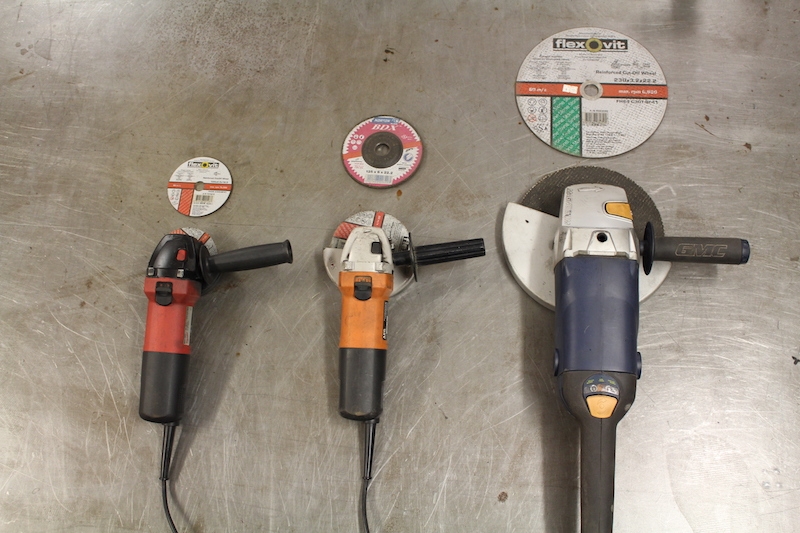 Angle grinders are generally classified by the nominal diameter of the accessories they use. The typical cutting and grinding accessories are described as “abrasive” in nature. They consist of abrasive particles bonded together into a wheel or disk. The materials used and construction of the wheel or disk will depend on the application – discs used for cutting steel will be different to discs used to grind stone, for example.

The abrasive particles “scrape” away material as they spin. Eventually they dull and break away from the bond, exposing new, sharp particles. This means the diameter of the wheel or disk decreases in use, until it is too small to be useful. 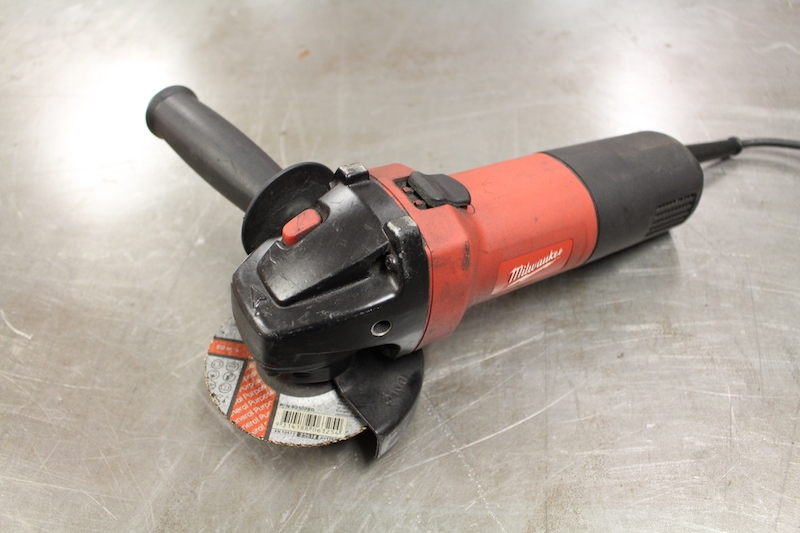 These three grinders are all 4-inch diameter tools, and are the cheapest ones you’ll generally find on the market for mass consumption.  This is the first size I bought and it’s well suited to motorcycle tasks.  When you’re using grinders on a regular basis it can be tedious changing accessories all the time. When these red Milwaukee grinders were on sale, I bought two. I can set up a cutting disk in one grinder and a grinding wheel or a sanding disk in another one. This speeds up my workflow. A good quality choice would be something like this. 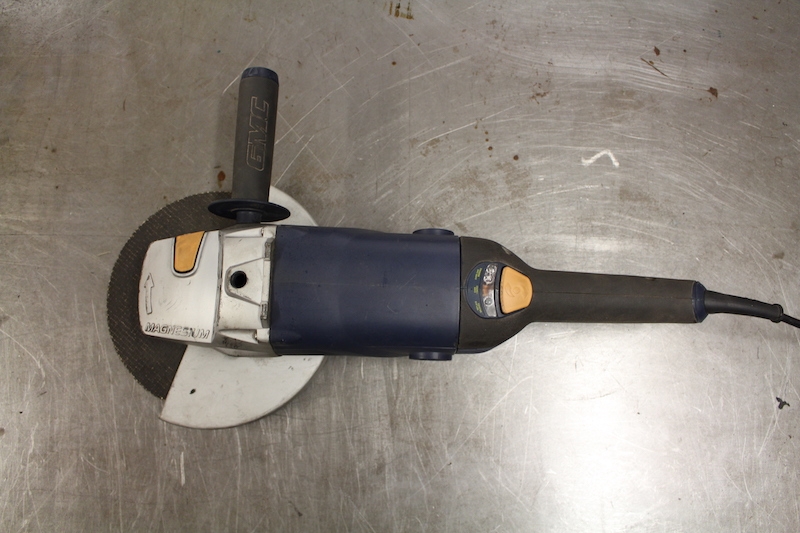 When I was remodelling our house, I needed to cut up some concrete, so I purchased the cheapest 9-inch grinder I could find, since I didn’t want to hire a demolition saw. This was great for big heavy jobs like concrete and roughly cutting up large steel sections. There is no “finesse” with a 9-inch grinder, so it’s not suitable for motorcycle work. Don’t waste your money unless you have other needs for it. “Bigger” is not “better” in this case. 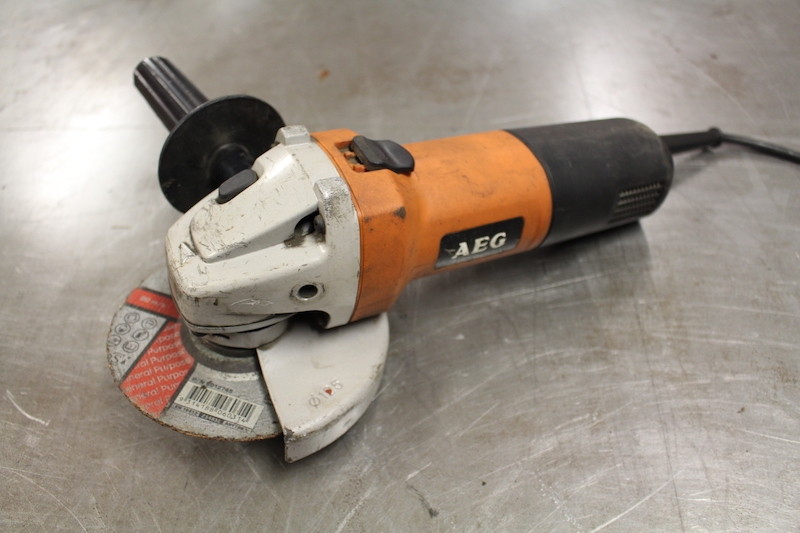 Some time later, I bought this 5-inch angle grinder. This size grinder has turned out to be very useful for one reason: it will cut through 1-inch/25mm tubing from one side in a single cut. This is a common size used on older motorcycles (as is 3/4″ and 7/8″, or 19mm and 22mm for the metric world). If cutting this tubing using a 4-inch grinder, you might only get three-quarters of the way through and then you have to turn around and cut from the other side. This makes a clean, straight cut more difficult. The accessories are a little bit more expensive, obviously, but they do last a longer than the 4-inch ones. I almost always leave a cutting disc in my 5-inch grinder and leave the 4-inch grinders for other duties.

Purchase a cheap 4-inch grinder first. If you choose to purchase a second grinder, consider a 5-inch grinder if cutting tube is a common task. 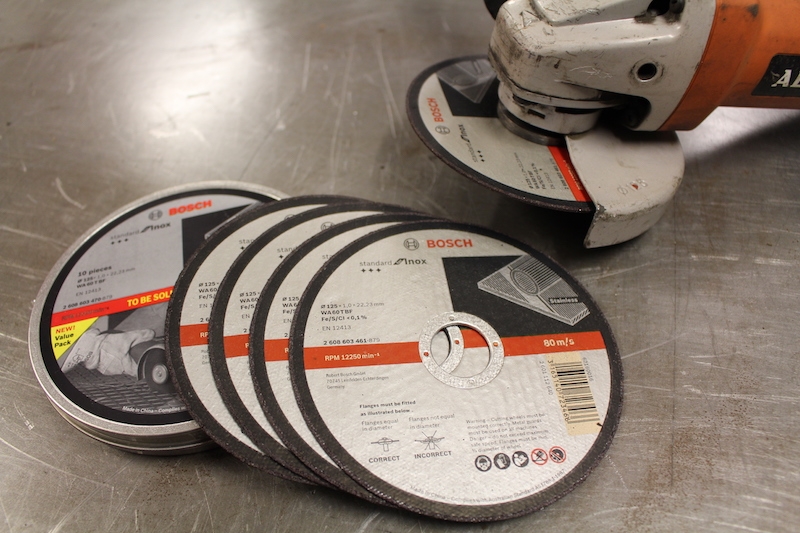 Let’s talk a bit about the accessories that I’m using. This particular grinder’s set up with the cutting wheel or a cutting blade. These one-millimeter thick ones are my favourite. They allow you to cut through tube cleanly, quickly and with a thin “kerf” (which is the thickness of the cut). These particular ones are made by Bosch and I just buy another box of ten when they’re on sale at my local hardware store. You don’t have to use this brand, but I can certain endorse their quality. 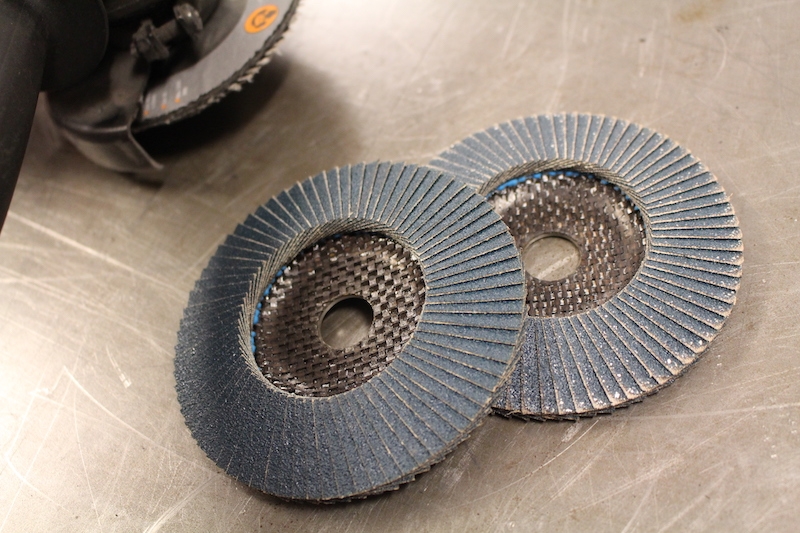 The other accessories that I find very useful is a “flap disk” or a sanding disk. A flap disk is constructed of an array of sanding pads bonded to a backing plate. They are available in a range of abrasive grits. As they are used, the edge of the pad wears away to expose more abrasive. While they are relatively expensive, I think the better quality discs last quite a while.

Again, this particular one’s Bosch, but that’s only because that’s what the store stocks where I buy them from. These aren’t really that cheap. Here in Australia they cost around about $7 to $8 each, which is not cheap but they do last quite a while, and they are very useful when working on a motorcycle. I prefer to purchase 100 grit or 120 grit. The really coarse grits (40, 60 or even 80 grit) are very aggressive and remove a lot of metal very quickly. One of my 4-inch grinders is always set up with a flap disc. 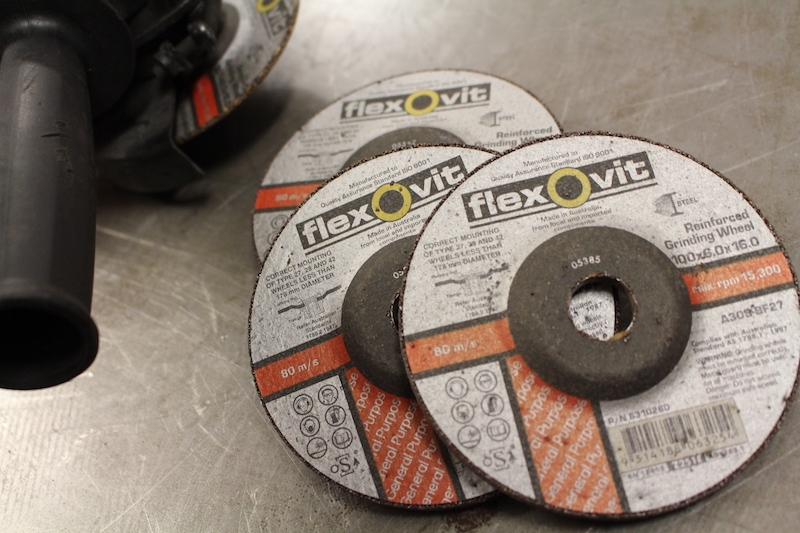 I don’t generally use grinding disks on motorcycle jobs. Similar to the coarse grit flap wheels, I think a grinding disc is a very aggressive method of removing metal. I tend to select a finer-grit flap disk before I would use a grinding disk. They are very cheap, but use them carefully on your motorcycle. 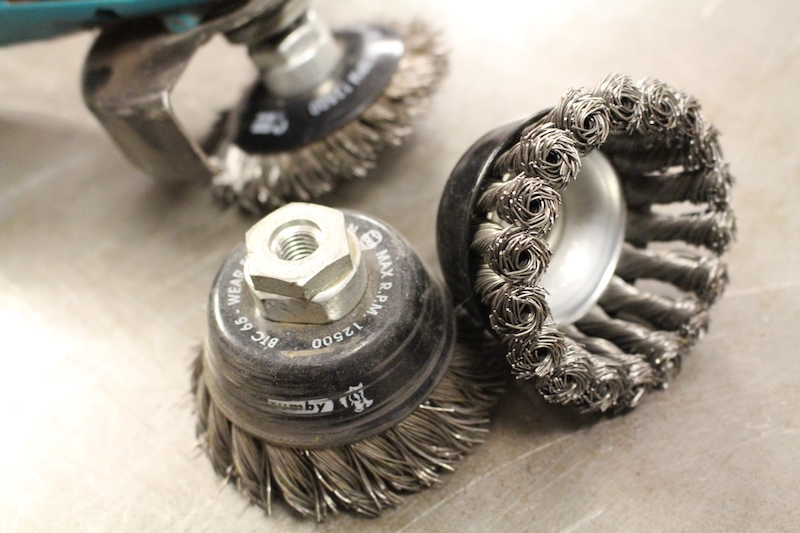 On my old Makita grinder, I’ve permanently installed a wire wheel. This is one of my go-to tools for stripping paint or cleaning up rust off surfaces. As the wire bristles spin, they smash paint and rust off a steel surface without significant damage. Steel bristles are harder than aluminum, so they will damage an aluminum surface. The bristles will remove paint and rust from irregular surfaces: I have stripped a number of complete motorcycle frames back to bare metal with a wire wheel on a grinder.

This grinder is used exclusively with a wire wheel. Since the wire wheel is much heavier than a cutting disc, it puts a more load on the electric motor and will probably quicken the grinder’s eventual demise! 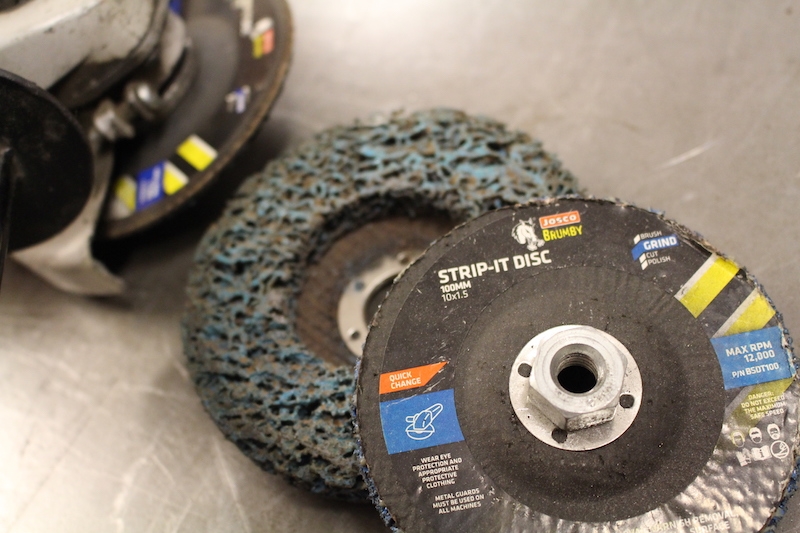 Alongside the wire wheel, my other favourite paint-removal accessory is the paint stripping disc. These have proprietary names depending on the manufacturer. The ones I purchase locally are described as “silicon impregnated abrasive nylon”.

These are great for motorcycle work, especially for larger, flatter surfaces, such as fender and gas tanks. With an angle grinder, a paint stripping disc and a wire wheel, you can remove paint from a whole motorcycle. Would it be quicker to send it for sand blasting or dipping? Sure, but you can do it at home at low-cost with these tools. You can see me demonstrate both wire wheels and paint stripping discs on a gas tank in this video.

I have stripped a number of tanks and fenders with these wheels, and in my non-scientific tests, I find the 5-inch version lasts a lot longer than the 4-inch version. This would suggest its more economical to buy these in 5-inch if you have a 5-inch grinder. 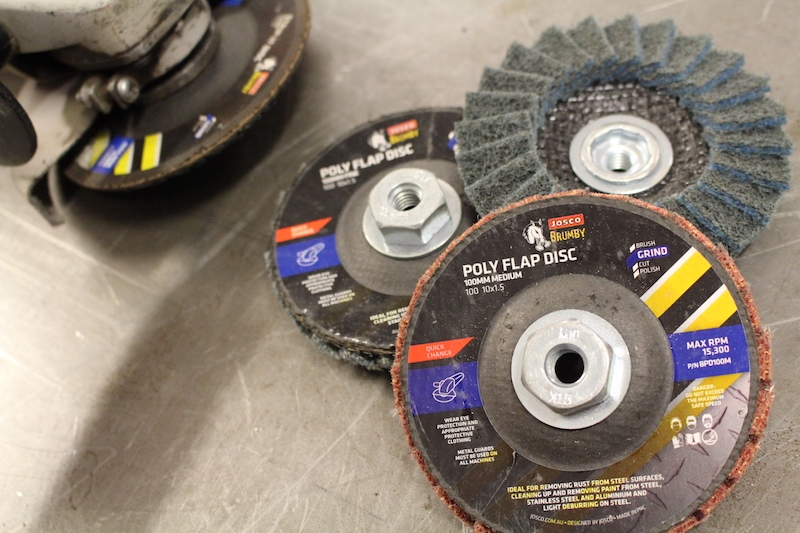 Similar construction to a flap wheel, synthetic non-woven flap discs contain a polymer abrasive rather than an abrasive particle pad. Different colors indicate different grades. These are great for final sanding and surface smoothing. They are much less aggressive than a sanding flap disc, so are relative safe to use on aluminum surfaces with less damage. 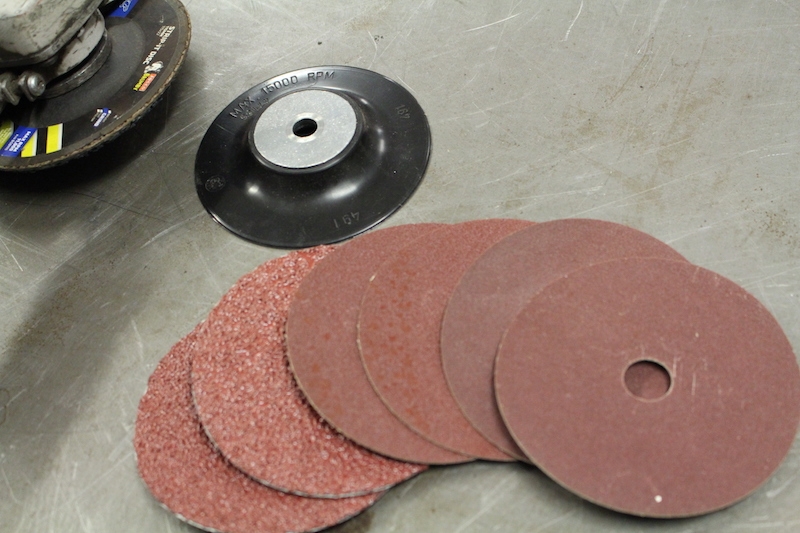 I’ve been experimenting with these sanding disks which need backing plate. I was wondering whether it would be cheaper to use something like this than to pay for a sanding flap disk. As far as I can tell, a flap disc still wins. You seem to get far more material removed with a flap disc. I think this is due to the flap disc revealing new abrasive as it wears.  Once these sanding discs are worn, they go in the trash. It was just an experiment to see what would happen. Stick with flap wheels if you can.

Grinder use and safety

Accessories must be matched to the spindle on the angle grinder you purchase. The packaging or instructions will specify the bore (hole in the centre of the disc) that fits your grinder. Wire wheels are sometimes supplied with a threaded fitting that screws directly onto the spindle. All my 4-inch grinders have a metric threaded spindle. Their size is an M10 x 1.5 thread.

Ensure you centre the disc on the spindle and clamp the disc snugly between the inner and outer flanges. The tools provided with the grinder are needed to secure the outer flange nut.

Bonded cutting and grinding discs are susceptible to impact. If you drop one, you should not use it. If it cracked due to being dropped, there is a risk it will explode when the angle grinder spins it up to full speed. Don’t believe me? Google images for “angle grinder accidents” – if you dare.

Grinders drive the spindle very quickly, and this speed combined with the abrasive does the work to cut or grind away metal. Don’t press the disk into the work heavily. If you hear the motor slowing down, you’re overloading it, and risk the tool kicking back at you if the disk gets jammed. Let the disk and the grinder do the work.

I see lots of YouTube videos showing angle grinders with the disk guard removed. I’m not really sure why people remove these guards. Your fingers are wrapped around the body of the angle grinder less than 2-inches away from a disc spinning at 10,000 rpm. With no guard, you are at risk of a visit to the Emergency Department if the grinder kicks back for you. Google those images again if you don’t believe me.

While you are merrily cutting or grinding, you’re sending showers of sparks (which is burning carbon) and small shards of metal flying through the air. It’s a great idea to protect your eyes from this airborne metal and sparks. If you’re spending a couple of hours paint stripping a motorcycle frame or tank, a disposable dust mask will reduce how much ends up in your nasal passages and lungs. And when I’m using an angle grinder, I’ll generally wear hearing protection.

All that airborne metal and carbon will coat the surrounding surfaces, so protect items such as disassembled engines, transmissions and carburetors from ingesting this nasty stuff. Move these parts or cover them while you’re working.

Finally, its wise to look around before you start cutting or grinding and check for fire hazards. It’s easy to accidently divert sparks into your clothes and burn yourself. Don’t ask me how I know this! Wire wheels will start ejecting wires after heavy use. They can be found embedded in your clothing in unusual locations at inopportune times while you’re working. Cover your arms and legs with heavy workwear to provide maximum protection.

And above all, have some fun on your project!